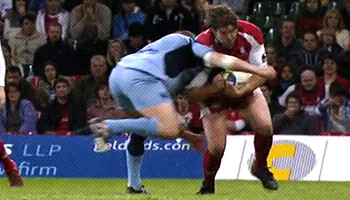 Earlier this week we featured highlights from what was probably the game of the weekend, Cardiff Blues vs Gloucester from the Millenium Stadium.

Besides all the tries, which you can see here, there was some tremendous physicality on show from both sides, with a handful of big hits adding to the spectacle.

Cardiff Blues front rower Gethin Jenkins had a tussle with Italian international Carlos Nieto all match. The two heavyweights scrummed down against each other, which was a battle in itself, and early in the first half Jenkins got one up on his man.

It wasn’t a powerful scrum though, it was in open field that Jenkins flew into Nieto with this fantastic hit. The massive side-on hit with the shoulder had a huge impact, actually causing damage and discomfort to Jenkins for some time afterwards.

It’s not often that we get to see the fatties have a go one-on-one like that, so this was great to see, even if Nieto didn’t really know that the contest was actually taking place.