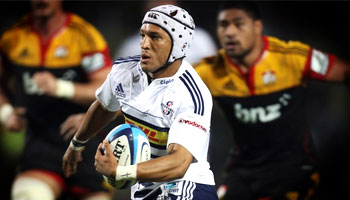 Gio Aplon scored this sensational solo effort against the Chiefs on Saturday in their Super Rugby meeting in Hamilton. The home side won 30-23 however, coming back from being 20-3 down.

Having flown off into a commanding lead, the Stormers, who last week lost to the Crusaders but have been in great form otherwise, would have thought that the game was dead and buried at halftime. The Chiefs came back though, scoring 27 points in the second half to take a great win.

The try of the game however came from the losing side, as Springbok flyer Gio Aplon showed that there most certainly still is room for the little guy in professional rugby. One of, if not the lightest players in the tournament, the former Sevens star glided through the Chiefs cover.

The angle he took initially, to break a tackle from a nicely timed Jean De Villiers pass, was what put him through. The way he casually bobbed and weaved, beating All Black players, was great to see and no doubt makes this try one of the best we’ve seen in the last few weeks.

In fact it was last year in the selfsame fixture that the Stormers scored another unbelievable try , that time it was a team effort though, with Bryan Habana crossing for the honours.

Besides this great effort, the loss was disappointing for the tourists, with captain Schalk Burger naturally unhappy about how they played in the last 40. “The second half was pretty disgusting really.”

There was a touch and go call that resulted in a penalty try, with Aplon himself being yellow carded, but all credit to the Chiefs for a fantastic comeback against one of the top sides in the tournament this year. As for the Aplon try, you won’t see many better this year. Enjoy.