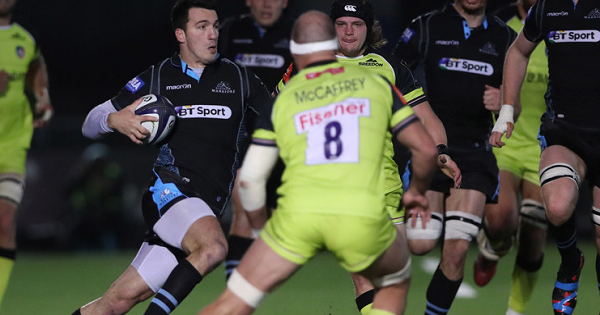 Glasgow produced one of the greatest performances in their history to stun two-time European Champions Cup champions Leicester last weekend, scoring five tries in a 42-13 victory at Scotstoun. This was one of the moments of the match.

Glasgow scored two intercept tries through Mark Bennett and Leonardo Sarto, but could have scored one of the tries of the year has it not been for some superb Leicester defence.

From a quick tap penalty, the ball was spread through the hands and eventually found Sarto who burst down the touchline, switched back inside and zig-zagged his way across field.

From then on it was a case of simple hands and drawing defenders, with only an amazing piece of defensive work from Matthew Tait and Telusa Veainu stopping Warriors wing Rory Hughes from scoring a spectacular coast-to-coast try.

An eye must also be kept on the supporting line Sarto took, coming off his right wing to be in a position to take the ball if required on the left.

Glasgow got a five metre scrum from this movement but couldn’t add another try. It mattered little in the end however as they secured an all-important victory in an ultra-tight pool 1.

Leicester scored the first try in a fractious opening half that saw two yellow cards, one for Ryan Wilson and the other for Matt Toomua, who was lucky not to see red for his tip-tackle on Glasgow out-half Finn Russell.

Both sides scored when down to 14-men but it was Glasgow who were the most clinical, touching down twice in the 10 minutes Wilson spent on the sidelines.

Today’s round two action sees Leicester needing to bounce back against Racing 92 at Welford Road, while Glasgow travel to Thomond Park hoping to make it two from two versus Munster.

View Glasgow’s near try below, plus full match highlights on page 2