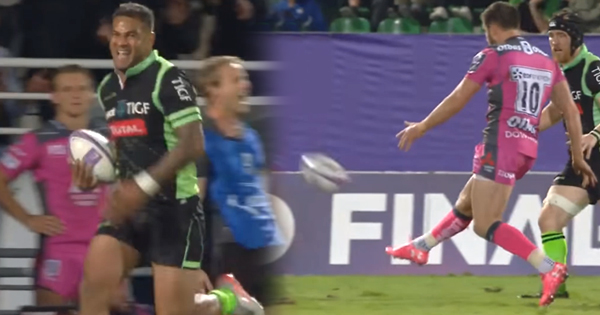 Former All Black Colin Slade scored 15 points as Pau saw off Gloucester 27-21 in the European Challenge Cup opening round on Thursday night. Gloucester made a late charge for a comeback, but were clinically shut down due to the intervention of winger Frank Halai.

After trailing 20-0, Gloucester got themselves within touching distance of a win.

Wwith all the momentum going their way, a poorly executed Owen Williams crosskick went straight into the arms of former Sevens star Halai, who sprinted in for a crucial try to take the game away from the visitors.

With plenty of numbers out wide, Williams will have sleepless nights about that option.

Frank ‘the Tank’ looked absolutely spent after scoring the try, but the powerhouse flyer then followed it up with a solid tackle shortly after the restart.

With Gloucester on the hunt for a losing bonus point, Williams made amends with time up.

Despite things going horribly wrong before, he had the audacity to attempt another crosskick, this time placing it better for Henry Purdy to cross in the corner.

The flyhalf then had to slot the kick from the touchline to get within seven, which he manged to do.

Watch the incident below and highlights from the match below that