Gloucester Rugby recently changed their emblem, causing a bit of an uproar with some fans, while others approved of the new look. Some, however, had more pressing concerns. Luckily for them, the club had a plan to take care of that.

The club, who have had the same emblem for ten years, vowed to cover the costs of ‘replacing’ old tattoos, provided that happened before the start of the season.

The Premiership club said: “If anybody who has the previous logo as a tattoo (2007-2018) and wants to have a tattoo of the new logo, then the club will cover the cost of this.” 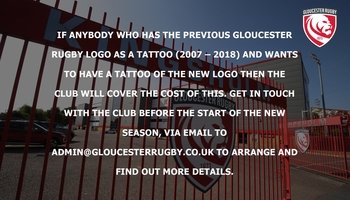 Gloucester chief executive Stephen Vaughan said in May: “We understand change is not for everybody and if they have taken the time, energy and commitment to put our crest on their bodies, then the least we can do is show the human side and our support.

“We will reimburse them the cost of a tattoo if they wanted to get the new Gloucester Rugby logo tattooed on their person. That would have to be done at a tattoo parlour in Gloucester and we would give them up until the start of the new season to get in touch with us.”

Unfortunately for the guy in this video, and perhaps many others, a cover-up of the old logo is a bit of a challenge, so now depending on how you look at him, you may see the old or new emblem.

Good luck if they ever decide to change it again.