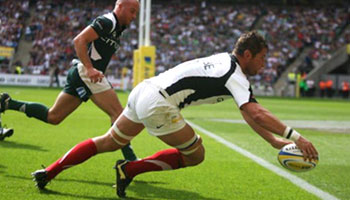 London Irish impressed at Twickenham on Saturday as they beat last seasons finalists Saracens 33-16 in the opening weekend of the Aviva Premiership. This short clip comes from the first try of the match, and a great bit of skill to send captain Ernst Jourbert over in the corner.

The Aviva Premiership – formerly the Guinness Premiership looks to have taken well to the new law interpretations as we saw some high tempo games with plenty of tries being scored. This one was no different, as both sides ran the ball well and London Irish set their dangerous backs away nicely.

Joubert and Schalk Brits had scored early for Saracens as they controlled the first half, but the Exiles piled on 15 points while Alex Goode was off the field, yellow carded, including tries to fullback Delon Armitage and winger Sailosi Tagicakibau.

Topsy Ojo played his part in earning them a penalty try, and then scored a late one as they finished off the game in style.

Highlights from the game are included in the e-player on the sidebar, so have a look there to see all the tries. For now though, this great piece of skill is worth featuring as it showed two instances of great quick hands, first by Brits then by Chris Wyles, to put Joubert away in the corner.