Guinness PRO12 Highlights and Wrap-up from Round 18 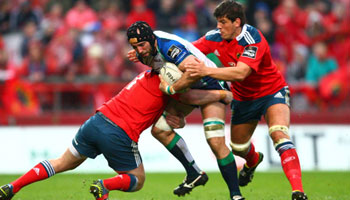 The Guinness PRO12 was back in full swing this past weekend as players from Ireland, Wales, Scotland and Italy returned to their clubs after a closely fought Six Nations. The weekend featured it’s fair bit of controversy, as well as some great bits of play and excellent tries.

Below we’ve got a wrap-up from each match, as well as the official highlights. We’ll do things in this format going forward so if you like it, please feel free to let us know. Enjoy.

League leaders Glasgow failed to exploit a healthy 20 point half-time lead in Dublin as an astonishing Leinster comeback nearly resulted in an unlikely win for the hosts. A late Glenn Bryce try for the visitors secured a 34-34 draw.

Glasgow dominated the opening half and scored their first try through full back Stuart Hogg after seven minutes. The Scottish international broke through the line of defensive and cleverly touch the ball down against the bottom of the post to grab the score.

A further Peter Horne penalty extended the lead before Fergus McFadden narrowed the gap with the hosts’ first try of the match. Glasgow retaliated immediately and tries through Richie Vernon and Mark Bennett gave Glasgow a 27-7 half-time advantage.

Ulster bounced back from a shock defeat to the Dragons with a convincing bonus point victory over Cardiff Blues at the Kingspan.

The home side surged to a 15-0 lead in the first half, but were fortunate to only lose No.8 Nick Williams for 10 minutes as he appeared to lead with his elbow into the face of Blues fly-half Rhys Patchell – who was stretchered off in a neck brace. Williams has since been cited for the incident.

The Blues were sprited in their comeback and Argentinean Lucas Amorosino’s mazy run resulted in a well worked try for winger Tom Isaacs. After being overlooked by Warren Gatland for most of the Six Nations, Alex Cuthbert added a second try.

A second try for Louis Ludik and a further score from Paul Marshall ensured Ulster reduced the gap to Glasgow at the top of the League to just two points.

After seeing nearest rivals Glasgow and Ulster secure bonus points, Munster knew exactly what they had to do against Connacht. They didn’t disappoint, securing a 42-20 victory at Thomond Park.

An early Jack Carty penalty for Connacht and a well taken Billy Holland try for Munster gave the home side a 7-3 lead after a cagey opening 40 minutes. But the turning point was Duncan Casey’s 55th minute try that opened the floodgates.

Simon Zebo brilliantly collected an Ian Keatley pass off his bootlaces to grab the third try, but Connacht responded came back well through a fine runaway try from substitute Miah Nikora.

Munster stretched their legs in the closing stages and tries through Andrew Smith, Denis Hurley and Keith Earls made sure of a convincing victory.

With this victory, Munster are now level on points with Ulster and just two behind Glasgow as they continue their quest for a home semi-final.

Away form from Edinburgh had typically been their catastrophic downfall, but Alan Solomons’ men secured their second in as many fixtures with a 26-13 victory over 14-man Scarlets.

An excellent opening try from Phil Burleigh after some great interplay with new Harlequins signing Tim Visser gave the Scots an early lead but the Scarlets – through Steven Shingler – replied with five penalties to lead 15-7.

Engaged in a colossal three-way battle for 6th in the League – synonym of European Champions Cup qualification – Edinburgh’s win over Scarlets and Connacht’s defeat in Limerick puts the Scots in pole position for now.

Ospreys needed to replicate the achievements of the top three teams above them against Zebre and they did just that. Recording a 53-22 win, they remain firmly in contention for the play-offs, four points off the top.

A largely one-sided affair started with two quick fire tries from the Ospreys with Dan Baker and Josh Matavesi touching down. Two penalties from Sam Davies and a further try from Scott Baldwin gave the hosts a commanding lead before Zebre got their first try through Dion Berryman.

The Ospreys then hit full throttle in the second half and a second try from Baker and one from Rhys Webb allowed the home side to pass the 40 point mark.

Zebre did fight back however and the visitors got a further two tries, from Giulio Toniolatti and Alberto Chillon came either side of two final scores from the Ospreys. A comfortable bonus point performance keeps the Ospreys four points clear of Leinster in the race for the semi finals.

The Dragons produced an impressive first half performance to lead comfortably, but had to withstand a Treviso comeback before rounding off a 32-17 victory in Northern Italy.

Jonathan Evans scored a superb solo try to open the scoring before Hallam Amos finished off the pick of the tries in a team effort starting from the Dragons’ goal line. Tom Prydie’s conversion and a further penalty gave them a 20 point lead.

Treviso hit back with two tries early in the second half. Enrico Bacchin and a penalty try on the back of a dominating scrum.

Jayden Hayward’s penalty closed the gap even further, but two tries from Prydie in the last 10 minutes made sure of the victory.