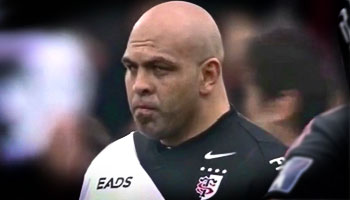 Springbok Gurthro Steenkamp made his Top 14 debut for Toulouse last weekend, and made quite an impact as he came off the bench shortly after halftime. Here’s a quick look at a few of the hits, and a big charge, that he made once getting on the park.

The Top 14 is yet again rammed with foreign talent this season, which makes it a fascinating competition to watch and follow. After the World Cup ended, a few players made first time moves there, while some switched around from club to club.

Loosehead Steenkamp made a fresh new start, having been successful at the Bulls in Pretoria for so long. He’s now cashing in on the change of scenery, a new lifestyle, and a chance to play with some of the best players in the world in a truly cosmopolitan league.

Ironically the man that he dished the punishment out to is also South African, and a Springbok tourist in the Tri Nations. Gerhard Mostert made his debut for Stade Francais recently, having moved to Paris from the Sharks in Durban.

There was talk of him being called up to the World Cup when the Springboks had a bit of an injury crisis in the second row, but he stayed in France, and seems suited to the physical style of play, with his natural bulk an asset to any side. Steenkamp however, seemed to pick him out on more than one occasions.

First there was a cracking hit, then a big charge just before Toulouse’s second try. Both worth seeing. The try that followed was great too, and you can watch that on the Felipe Contepomi drop goal blooper incident, which happened in the same match.