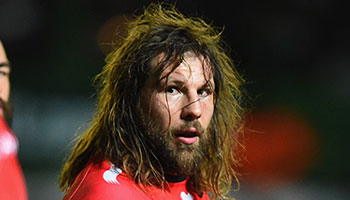 Former Leicester Tiger’s fan favourite Martin Castrogiovanni lashed out at the club following Toulon’s 25-21 loss on Sunday. On his first return to Welford Road since leaving for France, the Italy prop gave an incredibly frank account of why he left last year. His comments are now being investigated by the EPCR authorities.

Today Castrogiovanni apologised for what he said, but European Professional Club Rugby, the organisation that runs the Champions Cup, released a statement saying that they will investigate.

During the extensive outburst, the 33-year-old front rower said that he wanted to put the record straight, so opened up about why he left Leicester (for Toulon) after seven years, vehemently dismissing suggestions that it was financially motivated.

During the rant he took aim at his former boss Richard Cockerill, Leicester’s Director of Rugby.

“I never had the opportunity to defend myself when I left because people talked about this shit and money and Cockers talks about the money, but the real thing when I left this club is because you have [Dan] Cole and you have me,” said Castrogiovanni.

“Cole gets paid half the money from the RFU and I am foreign. What the f*ck you want? You have a good f*cking tighthead prop playing for England and a hairy f*cking Italian.

“The thing is that they made it look like I went for the money, but I paid £100,000 from my pocket to leave this club because I want to play rugby. That’s it,” he explained.

“I always love this club and I wanted to clarify and talk face to face, which is something Cockers never does. I think in the last few years people are getting sacked and this club was not like that before. They used to respect people, now they act like nothing is going on.

“That is not from the club, that is from the guys in charge.

“Everything you do in your life – good or bad – will come back to you and they sack people who have been at this club for 17 years. When I get to this club it was all about the shirt and the badge. It is easy not to talk about the money when you don’t really follow the club.

“I loved this club and I didn’t leave for the money,” Castro insisted.

“Fair enough they deserved to win today. They played really well and we didn’t play our standard. They should play their game of lives. I never want to speak with Cockers any more.

“I am the kind of guy that if I hate you, if you are not clear with me or if you have been a c*nt – how you say in English – I never want to speak to you any more. That’s it. That’s how I am. I am not fake.

“If I hate you, I say in your face and I will never speak to you again. Love me or hate me. I don’t hate anyone. Peace and love. I just don’t like c*nts.

Not afraid of showing that he has an excellent grasp of the English language, he continued with his choice vocabularly and spoke about the return fixture in round 4, at home in Toulon.

“I thought f*cking Leicester were a f*cking amateur team. What about that? If they lost another game at home he [Cockerill] was going to get the sack. Everyone wants to win games against us because we are the best and it’s normal.

“They played quite a good game, they were physical but they’ve just won a game. All they’ve done is win a f*cking game. Now they need to come to our home and we’ll see. We’ll see next week what’s going on.

“I just wanted to say that Cockers is talking too much. He’s just won a game and there is still a lot of f*cking games to play in this tournament. He was saying that people go for the money but he has a lot of f*cking squad players who get paid as well.

“I paid my own f*cking money to leave this club. I don’t need the money to play rugby. I love this game and I used to love this club – I still love this club, but when people are up to here in water, they talk this talk but don’t walk the walk.

“I left half of my heart here and I still love this place. It as a little bit strange to go into a different changing room but this is life as a professional rugby player. It felt like my first game for Italy against Argentina; there was a lot of emotion going around but soon you forget everything when you start playing.

“It was quite beautiful and I really enjoyed it. You never want to hate a player being in another shirt. A club is a club and life keeps going but when you get a lot of love from people like that they understand that you are a good person and you give the heart for this club.

“That is what made me happy because I think they understand that and I think they realise that. A player never wants to be bigger than this club.”

Cockerill had already addressed the media but returned in an attempt to defuse the tension, and responded by downplaying the attack, saying that the two will catch up at some stage.

“I’ve a lot of time for Castro – he’s a fantastic player and icon for this club and a great guy. I always said I would pick on merit and I did. Dan Cole was third choice behind Julian White and Castro and worked hard to become first choice,” Cockerill explained.

“Castro was released from his contract a year early and we agreed a transfer fee with Toulon. One day he’ll realise that’s just sport. This club made him the player he was. I don’t want him to feel bitter towards us. One day we’ll have a beer together and smile about it.”

Today Castrogiovanni issued an apology, saying that the language he shouldn’t have used such harsh language, but he stayed firm with what he had expressed.

“First of all I want to make amends for my profanity and apologise to everyone feeling offended by what I said. I’m sorry if my words have created misunderstandings. It also was not my intention to offend anyone, but only to point out my position after some statements.

“I hate lies and hypocrisy. I have always been a loyal person and I have been loyal to all the people I worked with. I felt to be attacked but moreover Toulon was attacked and my feelings were I had to protect my team from yet another provocation,” he said, possibly referring to Cockerill’s column earlier in the week, where he spoke of how Toulon had bought so many good players.

“I have always loved the Tigers. I grew up there and spent seven wonderful years, unique. Leicester supporters have made me feel at home, a beautiful piece of my heart is still there and when I went away it was not because of my will.

“I love rugby and the only thing I want to do is play, so I went to France, at Toulon, one of the best teams in the world,” he added.