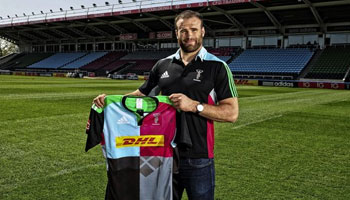 The transfer that all Harlequins fans have been dreaming about has finally come true, as Jamie Roberts will join Harlequins from next season.

The British and Irish Lions Series winner and two time Six Nations Grand Slam Champion has signed after months or speculation and rumours about his future with many certain that he would rejoin his former club Cardiff Blues.

Roberts has commented on his move saying, “I’m delighted to have signed for Harlequins. Having played in Cardiff and in Paris, moving to London is a chance for me to experience and further develop my career in a different league.

“You look at the calibre of the Harlequins squad and the coaching set up; they are a team that are going to be competing at the top level year in year out and that was a huge factor in my decision to sign”.

Harlequins Director of Rugby, Conor O’Shea, has stated that “The whole club is ecstatic to have signed a player of Jamie’s quality. He is massively ambitious to achieve at both club and international level. He will be a massive contributor to the history of this club, the development of our team and the development of young players like Joe Marchant and Harry Sloan”.

In addition to his move, Roberts has also been accepted to study a Masters degree (MPhil) in Medical Science (surgery) at Cambridge University.

Roberts has let it known that he is looking “forward to furthering my education part-time alongside my professional playing career. That balance in my life has served me well in the past and I’m excited to start this new chapter in London.”

Roberts signing comes at an exciting time for Harlequins fans as he joins the ranks alongside other notable signings James Horwill, Adam Jones, Tim Visser and Winston Stanley.