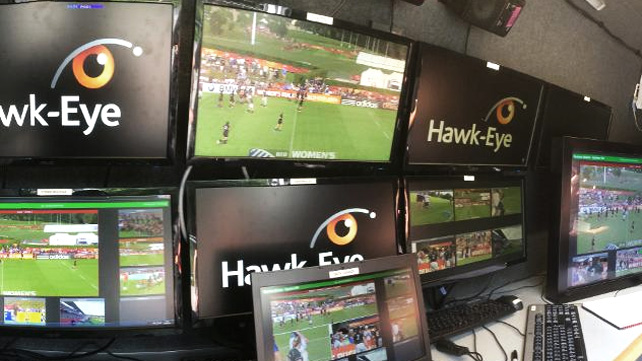 World Rugby has revealed that Hawk-Eye will make its rugby union debut at this year’s World Cup in an effort to improve video replay and review technology.

Hawk-Eye SMART Replay technology will be used in parallel to the existing Television Match Official (TMO) and will provide team medics extra support in identifying and assessing concussion and other head injuries.

The TMO will have enhanced access to multiple angle replays in real-time and slow motion simultaneously, as well as the special zoom functionality of Hawk-Eye’s SMART Replay technology.

The referee protocol however remains unchanged as far as the questions they can ask.

World Rugby Chief Executive Brett Gosper said: “Technology is an important component of the rugby performance and fan engagement environments and Rugby World Cup 2015 is set to showcase innovation and performance to a record global audience.

“Central to our sport is the integrity of player welfare and the match official decision-making process and we are delighted to be collaborating with Rugby World Cup 2015 host broadcaster ITV and Hawk-Eye to deliver a solution that will enhance these critical areas.

“Following successful tests, the system has clear benefits for the match official team, the medical team and fans around the world.”

World Rugby has been urged in recent months to tackle the issue of head injuries following the high-profile concussion incidents of England’s Mike Brown and Welsh winger George North.