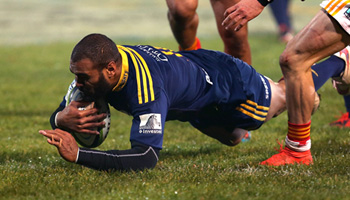 The Highlanders face the Waratahs in Sydney this Saturday in the first of two Super Rugby semi finals. The Dunedin side produced a superb performance to defeat the Chiefs in the playoff last weekend and despite this featured try being disallowed, it is still worth seeing.

The Highlanders are aiming to reach the final for the first time since 1999, where they lost 24-19 to the Crusaders.

This weekend also marks a return to the semi finals for Jamie Joseph’s men, having last appeared at this stage in 2002, again falling at the hands of the Crusaders.

They will be without stand out flanker Dan Pryor who dislocated his elbow in the 24-14 playoff win over the Chiefs. There was also some doubt over Malakai Fekitoa, but Joseph says he is keen to keep the absences down to a minimum.

“Malakai’s scratched his eye. Because it’s an eye there’s some sensitivity around the area but I think he will be fine. He’s [Pryor] a big loss for us and Alex Ainley’s played on a really crook knee, and he’s tweaked that again,” Joseph said.

While no team has got anywhere near the Hurricanes all season, defending champions Waratahs have been their closet challengers, winning 11 out of their 14 matches. For them it is their sixth semi final in ten years. They too have casualties, in the form of Kurtley Beale who has failed to recover from a quadriceps injury with the centre being replaced by Matt Carraro.

The last time these two sides met was in round 5 where the Highlanders ran out 26-19 victors in Dunedin. Will they complete a clean sweep or can the Waratahs exert revenge on Saturday?

You can watch last week’s brilliant team effort below, as well as the full match of the last encounter between the two sides here (next page)

The 'long discussion' that ended with Williams' cruel Lions cut

Warren Gatland has chosen 21 of the same Lions 23 that played last Saturday, with Liam Williams and Hamish Watson the only pair to lose out.

Rugby Sevens has everything a sporting fan could ever need. The pace is so fast that if you blink, you stand to miss out on all the action.

'I thought it was a bizarre decision' - Rassie's biggest strategic error?

Yet for scrum nauses, the British & Irish Lions versus the Springboks first Test in Cape Town offered up one particularly juicy subplot that was worth the wait.