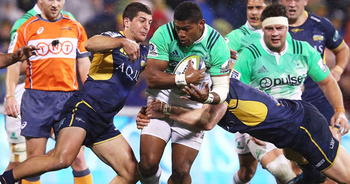 The Highlanders held off a late Brumbies onslaught to win their Super Rugby Quarter Final clash 15-9 in the rain of Canberra earlier today. The visitors scored through Waisake Naholo and Liam Squire either side of halftime, becoming the first team to quality for the semi finals.

Lima Sopoaga added five points with the boot, while for the Brumbies it was flyhalf Christian Lealiifano who kicked three penalties in the wet conditions.

“It was always going to be tough coming over here and we’re stoked we’re into the semi-finals,” said Highlanders skipper Shane Christie. “The whole game was a battle … the last 15 minutes we just dug in and the boys showed great character.”

The Brumbies came close late in the game, but the TMO was unable to verify any grounding.

“Disappointing, we had our chances there at the end but just could not get across the line,” said captain Stephen Moore. “It was a tight game in tough conditions but it comes down to those small moments. You’ve got to take every opportunity and we didn’t.”

“It was clearly a try for everyone who saw it. It’s really disappointing that a game comes down to that. We should be in the semi-finals right now.

“I give credit where it’s due and I think the Highlanders played really good football but I thought we played better tonight and I think we deserve that win.”