Highlights from Week 4 of the November Tests 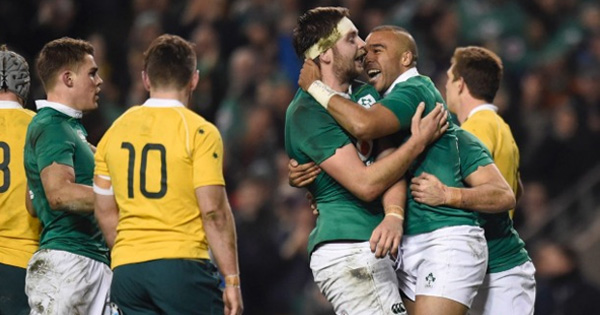 After another busy weekend, below are highlight recaps from each main international that took place over the last few days. We’ve posted the best tries here, but if you missed the matches and want to catch up, you can digest everything below.

While there were plenty of individual talking points, posting all matches in one place like this is probably the easiest way for you to go through them and watch what you want to watch, ignore what you don’t.

We’ll have specific posts for more of the talking points throughout the week.

Some highlights below are official, short clips, while others are extended, around 15 minutes long.

Tonga’s Tane Takulua sealed a 19-17 victory over Italy in Padua with a last-minute penalty, after earlier converting Siale Piutau’s 51st-minute try and slotting three other penalties.

A week after Italy upset South Africa, the Six Nations team came back down to earth with the loss, a big win for travelling Tonga.

Fullback Stuart Hogg scored two stunning tries as Scotland thumped Georgia in an entertaining showing in Kilmarnock. It brought to the end a positive few weeks for Scottish rugby, after a narrow defeat to Australia and a hard earned win over Argentina.

They are now just behind South Africa in the world rankings, so a good showing in the Six Nations could see them overtake the former World Champions.

France put in a strong performance against New Zealand and could perhaps have come away with a win had they had a bit of luck and were a bit more clinical at key moments in the contest. The All Blacks opened with a beautiful Israel Dagg try, as Beauden Barrett ran the show yet again, later capping things off with an intercept that gave nobody any chance of catching his jet shoes.

England lost winger Elliot Daly early in the match but were undeterred as they soldiered to their 13th successive Test win, with one match to come against the Wallabies next weekend.

Despite playing positive, attractive rugby most of the time, Argentina ended their northern hemisphere with three defeats after they lost to Wales, Scotland and England.

Ireland ended their November Tests with another big Southern Hemisphere scalp, as they edged Australia in a thrilling match in Dublin. They are now just two points behind the Wallabies in the Rankings (4th), and have a good chance of overtaking them if they have a strong Six Nations.

Their win – coming from tries by Iain Henderson, Garry Ringrose and Keith Earls – adds to victories this year over South Africa and New Zealand.

Wales beat South Africa for only the third time in their 110 year history of matches, and it never looked in doubt as the struggling Springboks put out a team that featured their most inexperienced backline since 1994.

The contest failed to ignite throughout but a strong performance from Justin Tipiruc helped Wales to a comfortable win. They now overtake South Africa in the World Rankings, moving up to 5th place.

Levani Botia scored twice as Fiji beat Japan to end their European tour with a win in the French town of Vannes. The win prevented Japan, who a week ago narrowly missed out on a draw with Wales, from taking 10th place in the world rankings.

Fiji suffered heavy losses to both the Barbarians and England in recent weeks, but turned things around to bounce back with five tries in this hard-fought contest.

No highlights available, so below is the full match