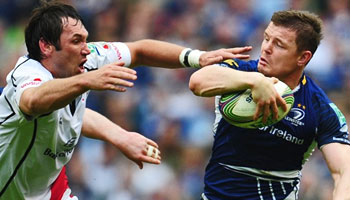 Leinster left Twickenham emphatic winners after a clinical performance, beating Ulster 42-14 to win their third Heineken Cup title in four years. They are the only team to successfully defend their title, and did it with the highest ever winning margin.

The all-Irish final looked as though it would be a tight affair but an uncompromising second half, and last ten minutes in particular, from Leinster gave way to a crushing victory over the Ulstermen.

First half tries were scored by Sean O’Brien and Cian Healey, while Heinke Van Der Merwe and Sean Cronin scored late in the game, and Jonathan Sexton kept the scoreboard ticking over.

“It will take a couple of days for it to properly settle in, but after we won one we talked about not being content with that and trying to create some sort of dynasty and something to be remembered by,” said Brian O’Driscoll post match.

“We’re going in the right direction towards doing that but I know this team will be hungry for more .

“That’s why it’s enjoyable, You’re going in day-in and day-out because you know you’re going to be pushed by the guy next to you. We played for one another out there and that really showed today.

In an age where players jump ship with the promise and lure of currency, captain Leo Cullen said he was honoured to be a part of the team he has always loved.

“There is something special about playing for the team you grew up supporting. That is the team you want to represent more than anything. Success with this team means the world to me,” he said.

All Black Brad Thorn also deserves a special mention, as he is now the only man to have won a Super Rugby title, a Heineken Cup, and a Rugby World Cup. He’s now aged 37.