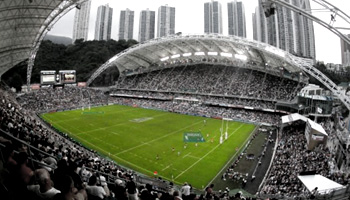 The third and final part of the History of the Sevens World Cup series coincides nicely with this weekends Hong Kong Sevens, which took place earlier today. Fiji came out trumps over South Africa in a rematch of the classic 1997 final, which is featured in this video.

It was back in 1994 though that a young giant hit the scene with a bang, lighting up the Hong Kong tournament in a way that was never seen before.

Eighteen year old New Zealander Johan Lomu made his mark on the tournament and in many ways, world rugby, as he terrorised defences from Fiji to Australia.

The 1997 tournament in Hong Kong was a huge event, culminating in one of the best finals ever to be seen. Fiji beat South Africa 24-21 in the end as the big name Springbok players couldnt do enough to hold off the Fijian comeback.

In 2001 the Sevens World Cup moved to Argentina, and it was Lomu once again who featured prominently, particularly in the final against Australia as he scored some amazing tries, running through all before him, as he talks about in his interview.

Sevens has come a long way, with many fifteens players having honed their craft in the shortened version of the game, making it a valuable part of the sport of rugby overall.