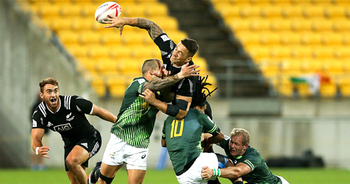 The final stretch in this season’s World Sevens Series begins in earnest this weekend with the 41st staging of the world-famous Hong Kong Sevens. Today we look back at some of the best moments from the series so far.

The tournament, which was first held in 1976, has provided some of the most iconic scenes in Sevens history, featuring greats such as Waisale Serevi and Jonah Lomu.

The 2016 edition has all the hallmarks of another classic. That is because joining the glittering Sevens regulars are a few of the biggest names from the 15-aside game.

New Zealand will be fielding offloading king Sonny Bill Williams and former Chiefs team-mate Liam Messam, while Australia have called upon the services of the honeybadger Nick Cummins.

Heading into the weekend, Fiji lead an increasingly tight leaderboard on 106 points, one ahead of New Zealand with South Africa loitering behind on 104. Australia are still within touching distance on 90 with the hugely impressive USA rounding out the top 5.

With Fiji looking to defend their title after a 33-19 Cup final win over the Kiwis last season, they should go in as favourites to secure their 16th title.

But it is not just the men competing in Hong Kong, 12 international Women’s Sevens teams will compete over the course of the weekend.

You can view some of the Series’ best moments so far in the video below: