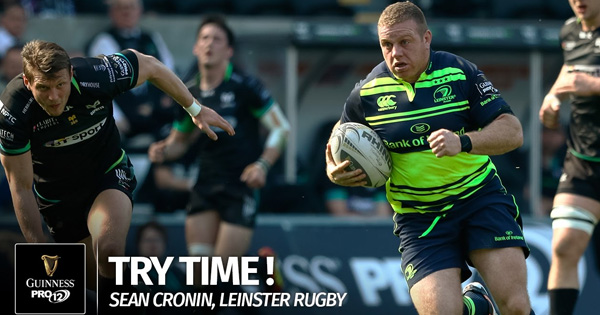 Leinster Hooker Sean Cronin scored this superb try during victory over the Ospreys at the weekend, making a fine return from injury after missing out on the entire Six Nations. There have since been calls for his inclusion in the British & Irish Lions squad to tour New Zealand.

Cronin took a lovely offload from Robbie Henshaw who created space for him out wide, then a sublime turn of pace made Wales flyhalf Dan Biggar look a little silly on defence.

Ronan O’Gara tweeted: “That’s why he will be the impact sub in each test vs NZ.. incredible feet and pace and power from Sean Cronin”, and winger Luke Fitgerald has said that he would definitely not be out of place wearing the famous red jersey of the Lions.

Cronin himself has played down the talk, instead focussing on Leinster’s upcoming

“Look, with the Lions thing, I’d be chuffed and delighted if I was even in those conversations. But it’s good to have people like ROG plugging for you.”

“I think the thought around picking the Lions squad is that he’s looking for guys playing at the top of the test arena, that’s the pool he is going to pick from.

“Now if he goes to pick guys from outside that, happy days, and I’d be chuffed and flattered even if I was just in those conversations. But it’s just about trying to get back here and stay fit and play well,” Cronin said.