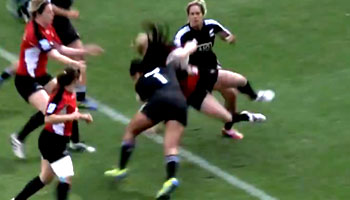 The pool allocation draw for the 2013 Rugby World Cup Sevens took place in Moscow earlier today, as teams from 28 countries discovered who they will face in June. There will be not only 24 mens teams, but 16 women’s teams taking part too.

Women’s rugby has made great strides in recent times as the inaugural Women’s World Series Sevens kicked off in Dubai late last year, followed by a succesful leg in the USA earlier this month.

The must see hit featured here took place in Houston as the New Zealand Women’s team took on Canada in the Cup Quarter Final on day two.

Linda Itunu – who famously gave Prince Charles a sweaty hug when meeting him at a national sports centre in Auckland in November last year – made a crunching hit on Canada’s Mandy Marchak, resulting in a turnover that led to a breakaway try.

The Rugby World Cup Sevens in Russia will be a great showcase for Women’s rugby, and with spectacular hits like this taking place, all rugby fans are sure to take notice.

“I am confident that Russia 2013 will be a resounding success,” said Rugby World Cup Limited Chairman Bernard Lapasset. “It will be an event that will bring people together from across this great sporting country and around the world to have fun, enjoy world-class Rugby, and experience the very best of Russian hospitality.”

The men’s event is split into six pools of four teams with the top team from each pool, together with the two best runners-up progressing to Cup quarter-finals. The defending champions are Wales.

The women’s event is split into four pools of four teams with the top two teams from each pool progressing to Cup quarter-finals. The defending champions are Australia.