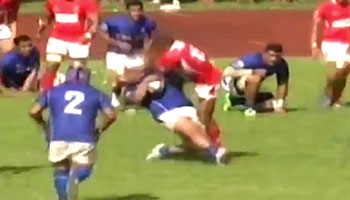 The Midyear Tours are currently on the go but the Pacific Nations Cup is also under way, and featured a dramatic 18-18 draw between Samoa and Tonga in the opening game on Saturday. In the first half there was this huge hit, by a fullback on a prop.

Tonga scored through Otulea Katoa before Josh Afu helped them to a 12-5 lead at halftime, with Samoa’s first half try coming through Fautua Otto. Northampton Saints star Kahn Fotuali’i came on after the restart, and while there were errors on both sides, things opened up late in the game.

Flyer David Lemi scored a try for Samoa on 65 minutes, which Tusi Pisi converted for a 15-12 lead. Tonga held their nerve though and Fetu’u Vainikolo beat a few defenders before Samoa killed the ball and replacement prop Census Johnston was yellow carded.

The kick was slotted and the scores were tied at 15-15 before another Pisi penalty looked like they were on track for a hard-fought 18-15 victory.

On fulltime a lineout infrigement left Wayne Barnes with no choice but to award a penalty, which  replacement Fangatapu Apikotoa stepped up and slotted for a well-deserved 18-18 draw. Samoa attacked the line but Tonga held out, and looked the happier of the two sides at the final whistle.

We’ve got highlights of the match on page two of this post, but the featured clip here is of a massive hit by fullback Tevita (David) Halaifonua on big prop Sakaria Taulafo. The tackle was penalised by referee Barnes, and some might say Halaifonua was lucky to only get a talking to.