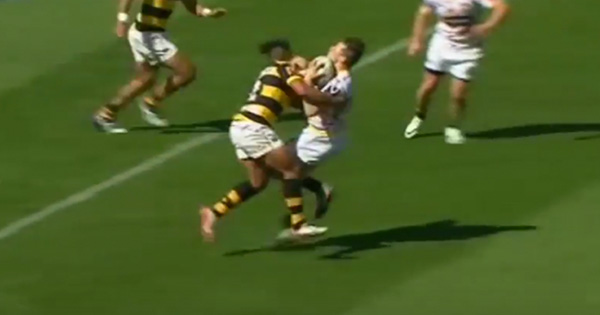 Johnny Fa’auli is quickly making a name for himself with some massive tackles as he recently went a rampage in the Mitre 10 Cup. Meanwhile, Hunter Paisami also put in a monster hit during a schoolboys clash between Australia and New Zealand.

In the first video, Fa’auli proves very adept at reading Wellington’s backline play and smashes several opponents in the process. Hoani Matenga is the first victim and is flattened, in no small part, due to being on the receiveing end of an unfortunate hospital pass.

Fa’auli isn’t done there and shows some great awarness as Wellington learn the hard way not to try and run through Johhny Fa’auli. Taranaki would take the match 54-31. There is also a bonus clip thrown in from Fa’auli’s ITM Cup days.

In the second video, Hunter Paisami of the Australian Schoolboys side absolutely crushes Leicester Faingaanuku of the New Zealand Schoolboys. Fair play to Faingaanuku as he popped right back up after the devastating yet perfectly legal hit. New Zealand went on to win the match 32-22.