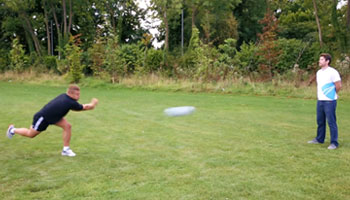 Leinster flyhalf Ian Madigan was recently asked to take part in a promo video for Impact Gumshields. The intention was to show how much protection they offer, but it turned out to be one of the most painful gumshield tests you’re likely to see.

Last week James Murphy, co-founder of the company and seen here taking one for the team, popped up on Skype to explain that he was still aching from a video they’d just shot with Madigan.

He said that Madigan was told to go for his face, but was of course, welcome to aim wherever he wanted to. The young Leinsterman didn’t need a second invitation.

His bullet pass, shot on the first take, was perfectly aimed, and that was the end of filming for the day. In fact, that was all they needed to create this great promo video, which since going live has already spread virally across Ireland and now further afield too.

Madigan’s cheeky grin after says it all, and he can be heard saying “I think it was a small bit low”.

WIN YOURSELF AN IMPACT GUMSHIELD! This competition is now closed
While the gumshield test didn’t quite go to plan, the product is great and today we’re giving some away (UK & Ireland only), so to enter and stand a chance of winning, simply do one of the following:

1. Follow @rugbydump and Tweet:
‘I’ve just entered to win an @impactgumshield after watching this brutal product test! @rugbydump‘
2. Leave your reaction as a comment below. The best comment will also be entered into the draw.

Visit impactgumshields.com for more about what they do, which includes dental custom fit gumshields to individuals, schools and clubs throughout Ireland and the UK