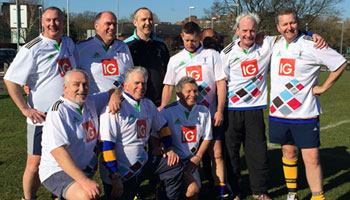 In November IG, the global leader in online trading and Harlequins’ Principal Partner, ran a competition called Live Every Dream. It gave one lucky entrant the chance to take their rugby team on the tour of a lifetime to visit and play Melbourne Harlequins down under.

There were hundreds of high calibre entries, all with their own unique stories and takes on why they should be selected. After a rigorous selection process Harlequins’ Director of Rugby Conor O’Shea and former Harlequins captain Will Skinner selected Paul Gilbert from veterans side Chipstead Executive Occasionals (CEOs) as the lucky winner.

Paul, or ‘The Judge’ as he is known by his teammates, who go by the names of Annie Lennox, The Major, Gibbo, Rolly, Giddy, Samwise, Teigr Cub, Sleazy Rider and Taffy Duck, thought that their rugby playing days were behind them. This turn of events led them to dust off their club blazers and ties and prepare to live the dream one more time.

Their preparations were given a boost by a training session at Surrey Sports Park with the Harlequins coaching team. It refreshed memories of the rules, which once in Melbourne didn’t really seem to apply!
In March the CEOs tour began, and what a tour it turned out to be.

An action packed itinerary included a stadium tour and meet and greet with the Melbourne Rebels, the Cricket World Cup Quarter Finals at the MCG, a vineyard tour, beach rugby and of course the long-awaited clash with Melbourne Harlequins.

The two sides battled to a spirited 5-5 all draw, with the following match report compiled by Melbourne Harlequins’ Club Secretary:

“Decided by an arm wrestle, Chipstead kicked off to the roar of a strong local and visitor friendly contingent.  Although going downhill from the kick-off, and in temperatures hovering around 26C, Chipstead stepped through a referee enabled gate to sprint (surprising us all) to make the first score.

The referee reported at half time that he was challenged by the visitors interpretation of “touch” (or as practised by Chipstead: “shoulder”), offside and deliberate knock downs, so team warnings were issued.

With the scores remaining tight throughout the game, the tension built; but to the great relief of the home crowd fortunes changed, with the referee awarding Quins a well-deserved penalty try at the death.

Perhaps not surprisingly after three 15 minute sessions with the score at 5-5, the players voted in favour of the bar for refreshments rather than play it out.

With Kangaroo steak on the menu and a bit of Australian red wine to wash it down, Chipstead soon swung into the post-game activities aided by their tour Judge who kept them under control.”

The team returned home weary, with many tales to tell but little time for rest, as they were asked to attend BT Sport’s Rugby Tonight show for the first viewing of their tour video.