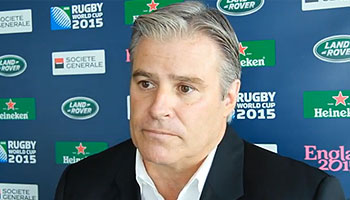 With Rugby World Cup 2015 kickoff just two years away, International Rugby Board CEO Brett Gosper shares his thoughts on the state of European club rugby, the positives the RWC will bring, and discusses the new scrum protocols.

Gosper admitted that the current issues could prove distracting in the lead up to the World Cup, but he has said that the IRB will support discussions in whatever way they can, but will not intervene.

Earlier today the IRB released a statement backing up what he has said, saying that it is in the best interests of the development of European Rugby to have a strong pan-European competition.

“The International Rugby Board (IRB) strongly encourages and supports ongoing stakeholder dialogue in order to reach an agreement,” the statement read.

“To clarify the global competition procedure, under IRB Regulations all cross-border club competitions require Union approval in the first instance and, if reached, ultimately the approval of the IRB Council.

“We naturally support our Unions in their attempts to grow a thriving, genuinely cross-European competition. All hypothetical scenarios remain just that with discussions ongoing and it would not be appropriate to pre-empt the view of Council, should approval be required.”

You can also get another perspective on the club rugby crisis via an interesting discussion with RTE’s pundits and players Conor O’Shea, Shane Horgan and Donal Lenihan – Heineken Cup debate