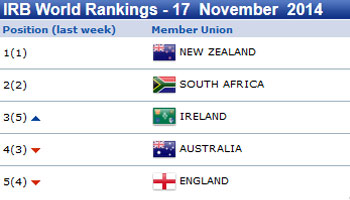 Ireland have moved up to third in the IRB Rankings afting beating Georgia, and thanks to Australia and England losing to France and South Africa respectively. Coach Joe Schmidt says it’s nothing but a distraction though, and not something that should be focused on by the players.

Third is Ireland’s highest ever position, having last occupied it in November of 2006.

They actually didn’t improve their points rating after beating Georgia 49-7, but the losses to Australia and England meant that those two sides dropped down. Beating South Africa a week earlier would have also helped their cause though.

“I don’t think we can win anything by saying we’re third in the world,” said coach Joe Schmidt.

“I think it’s fantastic, and a feather in the cap of the lads who have rolled their sleeves up for the last 12 months, but I can’t say it’s something we’d be talking about or even aware of.” 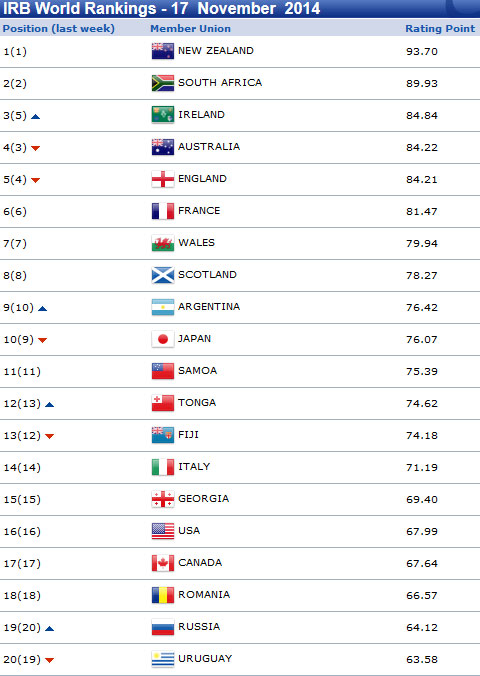 The IRB break down the latest rankings update:

The Irish now have a cushion of 0.62 points from Australia, who avoided a two-place fall to fifth by the smallest of margins after a 29-26 loss to France in Paris with the Wallabies sitting just one hundredth of a point above England now.

South Africa’s 31-28 win at Twickenham has strengthened their position of second place – some five points clear of Ireland – and closed the gap to New Zealand by nearly one point, although the All Blacks still sit 3.77 points clear at the top.

New Zealand did not improve their rating on the back of a 24-16 win over eighth ranked Scotland at Murrayfield on a weekend which saw the world champions celebrate five years as the number one side in the rankings.

While England have fallen two places to fifth on the back of losses to South Africa and New Zealand this month and lost their mantle as the leading northern hemisphere nation to Ireland, they still sit 2.74 points above France.

Wales improved their rating slightly in seventh with the narrow 17-13 win over their Rugby World Cup 2015 Pool A opponents Fiji, a result which – in tandem with Tonga’s 40-12 win over the USA in Gloucester – sees the two Pacific Island nations swap places with the Ikale Tahi now 12th.

Argentina have climbed one place to ninth on the back of their 20-18 victory over Italy in Genoa on Friday. Los Pumas gained more points for that win and therefore climbed above Japan, who ran out 18-13 winners over 18th ranked Romania in Bucharest.

The only other positional change in the top 20 sees Russia climb one place to 19th – swapping places with Uruguay, the side who had ended their RWC 2015 dreams last month – following a 39-27 win over their Hong Kong, one which sees their hosts fall two to 27th.

There were three European Nations Cup 2016 matches over the weekend, although none resulted in any positional changes. Moldova and Belgium both improved their ratings after victories over Poland (48-25) and Ukraine (25-10) in Division 1B but remain in 28th and 30th respectively.

The final ENC match saw Latvia overcome Cyprus 39-20 in Riga in Division 2B, but that had no impact  on the ratings as Cyprus are not an IRB Member Union. The win was significant, though, in that it was Cyprus’ first defeat since September 2008 and ended their run of 23 consecutive victories.

For a full rankings explanation, visit the rankings page on the IRB website