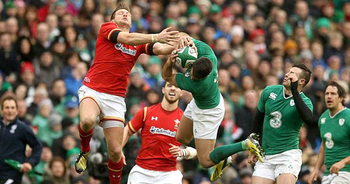 Ireland and Wales played out a 16-16 draw on Sunday, the first between the two sides in Dublin since 1974. As a result, neither side will be able to compete for a Grand Slam or Triple Crown, but both still have realistic chances of going for the overall title.

Defending champions Ireland started the better of the two sides, shooting out to a 13-0 lead before Wales pulled things back to lead, and Jonny Sexton then drew level with a late penalty.

A Conor Murray try started off Ireland’s charge for a third successive title, but Toby Faletau scored just before the half, while Rhys Priestland kicked them ahead. The long range Sexton kick rescued things for the home side, but captain Rory Best was disappointed with not taking the win.

“It’s a difficult one, nobody’s overly happy with a draw. It’s disappointing we let Wales back into it,” he said, while coach Joe Schmidt spoke about being deflated.

“I did sense to be honest that we were a little bit vulnerable, to be honest,” said the Kiwi.

“You certainly can’t feel elated, a little bit deflated because we built that 13-0 advantage and I thought it was on the back of some really strong work both sides of the ball.

“I’m sure both teams are a little bit deflated. I think with the firepower they brought to the table we’re reasonably happy with the way that the lads responded.”

Wales skipper Sam Warburton said a draw was not a good result for either team, while coach Warren Gatland felt it was probably a fair reflection of the contest.

“We were disappointed with how we started but good sides get themselves back into the game and we did that and possibly should have come away with a win,” said Gatland.

“We dominated the territory and possession to get in front. Then to not execute an exit play accurately enough was disappointing.

“I don’t want to take anything away from Ireland. They contributed well and maybe a draw was a fair reflection of the game.”

Wales host Scotland next, while Ireland travel to Paris to take on France.