Ireland back on form with crushing win over Italy 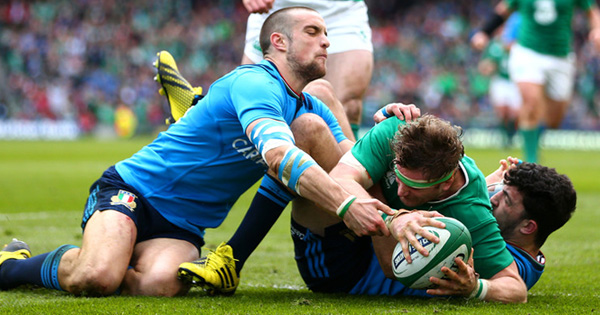 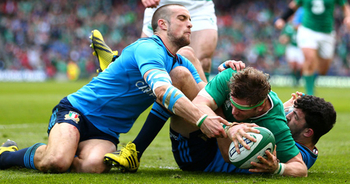 Ireland produced a wonderous performance in front of a baying home crowd in Dublin to thrash Italy 58-15 in the 6 Nations on Saturday.

Joe Schmidt’s side were a completely different animal to the one that went down meekly to England at Twickenham a fortnight ago and easily secured their first win of the 2016 campaign.

At the heart of a dominant first half – where they scored four tries – was Jonathan Sexton. The fly-half was back to his perenial best despite copping his customary big hit courtesy of the shoulder of Sergio Parisse, and was instrumental in two of the first half’s best tries.

The pick of the bunch was Jamie Heaslip’s effort on the brink of the break, whereby almost every Irish player touched the ball.

It started with a sumptuous reverse pass from Simon Zebo – who showed impressive mobility throughout – to the on-rushing Jared Payne before going through the hands of Sexton, Fergus McFadden and finally Heaslip to go coast-to-coast.

Sexton was particularly off with the boot but that didn’t matter. The Leinster 10 firmly stood out as the best player in the opening 40 minutes – he ultimately only played 50 before being subbed. Combined with a consumate kicking game, Sexton’s passing was equally as good, setting up Andrew Trimble for the first try of the game.

After building on their 25-3 half-time lead with further tries from Heaslip, Payne, Sean Cronin and McFadden, Ireland let their guard slip momentarily as Italy grabbed two back through David Odiete and Leonardo Sarto.

This was momentary as Iain Madigan scored to take his side passed the half century to cap off a comprehensive return to form.

You can view an extended highlights wrap below. If you’d like to watch short highlights rather (2:07), you can do so on page two of this post