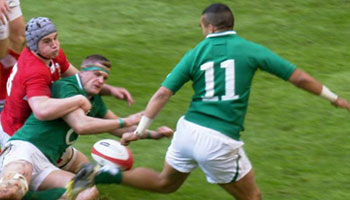 Ireland fought off a determined second half Welsh comeback to win the opening game of the Six Nations championship 30-22 at the Millennium Stadium. The visitors led 30-3 early in the second half and held on thanks to their gutsy defence.

Despite the big second half effort, it was the defending champions’ eight successive Test match defeat, automatically ruling out the chance of retaining the Grand Slam they achieved last year.

Ireland scored through Simon Zebo, Cian Healy and Brian O’Driscoll, with the Healy try in particular coming about through a great bit of instinctual play by Munster winger Zebo.

Alex Cuthbert, Leigh Halfpenny and Craig Mitchell scored for Wales in the second half as their superior possession allowed them to launch their comeback and narrow the scoreline, but Ireland held on and can now look forward to hosting England next weekend.

Wales head to France for an unforgiving encounter with the side that are many fans’ favourites for the title. They have many positives to take from the second half but they were always chasing the game after going 30-3 down.

“It was a game of contrasting halves – to score three tries and be on the losing side, you look back and that first 20 minutes was key,” said Wales coach Rob Howley.

At Twickenham England beat Scotland 38-18, while Italy host France in Rome on Sunday.