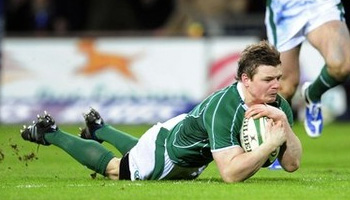 Ireland came out victors against France at Croke Park in Dublin on Saturday with an excellent victory over the side that outdid them for the championship in 2007. It was the first victory in eight matches for the Irish against France and provided a perfect start for coach Declan Kidney on his Six Nations debut.

“In some of the Ireland-France matches recently I think the lads have been a bit unlucky, Kidney said afterwards.

“A bounce of a ball could have won other games for them so it was nice a few things went our way today.”

“I’m just delighted for the players, I keep saying it but you don’t believe me.

“It’s not about me, it’s about everybody’s efforts. Somebody has to be in this seat.”

“The way we reacted after that drop goal typified a team that learned a lot from two years ago,” captain Brian O’Driscoll told a news conference, referring to Lionel Beauxis’s kick that briefly put the French within a try of victory late on.

“The way we hunted them down and weren’t going to give it up to them easily. Maybe there was a little bit of knowledge in the team second time around.”

O’Driscoll said: “We’re where we want to be. We’ve played one game, we’ve won one game, we’re happy with our performance.”