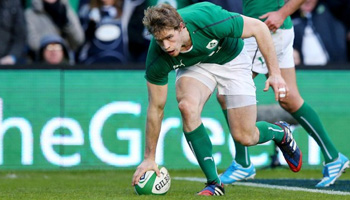 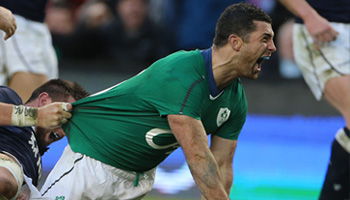 Ireland scored three tries as they started their 2014 Six Nations campaign with a comfortable 28-6 win over Scotland in Dublin earlier today. While Scotland showed flashes of class at times, they never really tested the Irish.

While things were fairly even in the first half, with Ireland leading just 6-3 a few minutes before the break, a try by Andrew Trimble on the stroke of half time gave them an 11-3 cushion.

Man of the Match Jamie Heaslip came close to scoring earlier in the half after a brilliant Jonny Sexton break, but was out by inches in the corner. He crossed in the second though, and Ireland were on course to right the wrongs of last season.

Rob Kearney added a third try ten minutes from time, on the occasion of his 50th Testm while brother Dave came close minutes from the final whistle after a Paddy Jackson chip.

Scotland will need to lift themselves again when they host England in a week, while Ireland will look to upset Six Nations champions Wales, also at home in Dublin.

Full highlights will be slotted in here as soon as they’re available. For now, here are quick highlights, and you can view the Sexton break and Heaslip chance on page two of this post

Jamie Heaslip came close to scoring in the first half after a brilliant break from Jonny Sexton, but as replays showed, he was in touch. The TMO confirmed it.