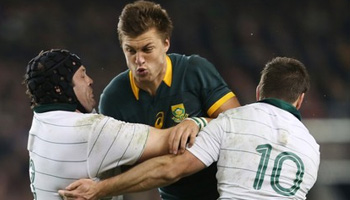 An inspired Ireland proved to strong for a rusty looking South Africa in Dublin on Saturday. The home side dominated the fierce breakdown battle, and took their points to win 29-15, for the Boks’ first Northern Hemisphere team defeat since 2010.

Coming off a win over the All Blacks and success over Ireland in recent years, the Springboks were expected to be far more convincing, especially with dominant scrums and a solid lineout. The Irish forward pack forced errors though, with shaky looking scrumhalf play and missed chances, ill-discipline ultimately cost the tourists, as both sides scored two tries apiece.

Jonathan Sexton kicked four penalty goals and two conversions however, as South Africa chose not to kick penalties in the first half, instead opting for the lineout maul.

Trailing in the final quarter, a comeback was disrupted by a surprising yellow card decision by referee Romaine Poite, who sinbinned Adriaan Strauss for taking Rob Kearney in the air.

“We came right back into the game, started to get some quick ball later on, and then the yellow card,” said Springbok coach Heyneke Meyer. “By then, away from home it’s difficult to defend that, especially against a good quality side when they have a good kicking game, kicking behind us.

“We are dissappointed with the way we played – we’re much better than that. All credit to them and they were the better side tonight.”

While the yellow card wasn’t the reason for the loss, it halted momentum and a try was scored during that period. Meyer didn’t focus on it too much though, instead praising the impressive Irish.

“We’ve got a saying at the Boks that the referee is always right. Willie [Le Roux] also in the first half went up, and… you know, we won’t talk about that one. The ref’s always right and thats the way I see it and it’s not an excuse. You have to be careful. We can use it as an excuse but I don’t want to.

“I thought Ireland were the better side, they were brilliant and that probably wouldn’t have made a difference, although I thought we came back into the game, they still tactically outkicked us and outplayed us.

“We are sorry that we let our country and our supporters down with that performance,” he added.

“I’m delighted with the performance. I don’t think you could ask too much more from a courage perspective. I think there are a number of players who really stood up physically to what was going to be a really tough assignment.

“Paul [O’Connell] and the players put a lot of work into having a clear strategy. That strategy was well delivered by the players but the physicality they delivered allowed us to stay in the game.”