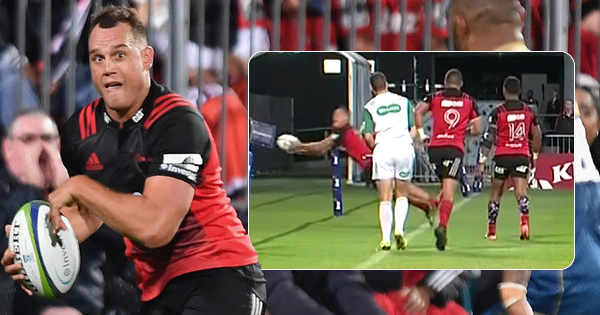 Israel Dagg celebrated his 100th Super Rugby game over the weekend, and it appears that he’s already in mid-season form after showing off some serious skill to help the Crusaders beat the Brumbies, 17-13.

After a resurgent 2016 that saw him regain his form and once again make his mark for the All Blacks, Dagg continued his brilliance in the opening round match.

Everyone already knows about the howitzer of a boot he possesses. However, he’s much more than a one-trick pony as he’s routinely called upon at full-back and wing due to his serious pace and deceptive strength.

A few noteworthy moments from the match bear mention. One is his absolute laser-like left to right pass for the Crusaders’ first score, his neat offload for their second, and then this amazing save of a ball that was seemingly kicked into touch.

The producers even felt it was out as they switched to a replay (we managed to hash together a clip with the one angle available), but Dagg saw his chance and dived for the save, thus keeping play alive.

Sergio Parisse did something similar for Italy against England, however he was out then hopped in. Either way, the ball stayed in play on both occassions and play continued.

One would have to assume that Dagg is making a serious push for inclusion in Steve Hansen’s squad for the Lions series. With moments like these, it should be an easy choice.

It was also nice to see Dagg, who is a fan favourite, honoured after the match for his century of appearances, as he thanked his family, teammates, and the Brumbies for the special occasion.