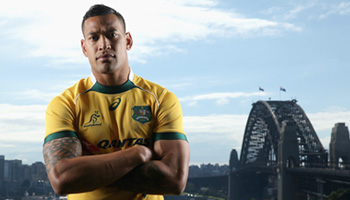 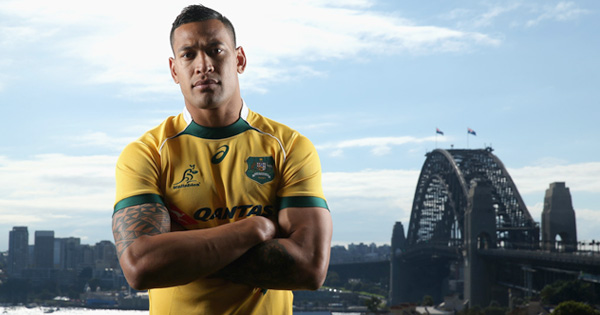 Australia and Waratahs fullback Israel Folau has signed a fresh three year flexible contract with Australian Rugby this week. It is a deal that will keep the 26 year-old available for national selection until the end of 2018. More info below, plus a tribute video.

An omnipresent figure in the Wallabies setup since his debut in 2013, Folau has remarkably played in the last 29 consecutive matches and scored 17 tries.

He marked his arrival on the Union stage after 6 years in League with a two-try performance in the first test against the British and Irish Lions.

Last season, he played a significant role in the Waratahs’ first Super Rugby title and has since shown equally standout form in 2015. His 25 tries for the Sydney based side put him just four behind leading try scorer Lote Tuqiri.

But he won’t be adding to his Waratahs scorecard any time soon however. Folau will join Japanese Top League side NTT Docomo Red Hurricanes along with fellow Super Rugby players Eben Etzebeth and Handre Pollard after this year’s Rugby World Cup.

The flexible deal will allow Folau to play his rugby outside Australia and still be available for selection for the Wallabies. Speaking of his new deal, Folau said: “I’ve already had so many great moments and experiences in Rugby over the past few years, but I feel like I am still just scratching the surface of what I am capable of, which is something that really excites me.”

“In the end, there is still so much I want to achieve playing Rugby in Australia and am thrilled to now have my contract sorted through until the end of 2018.”

A man who is just as pleased to have retained Folau’s services for the forseeable future is current Waratahs and Australia coach Michael Cheika.

“He works extremely hard at being the exceptional talent he is, and is someone all Australian Rugby fans can be excited about seeing in the gold jersey for a long time yet.

“He has developed his game so much in the two and a half years since he initially joined the Waratahs, and I know he has a burning desire to continue growing as a player over the next few seasons. Israel is one of Rugby’s truly world-class individuals, and he is the type of person and player that you want setting the standards in any team environment,” Cheika said.

You can watch some of Israel Folau’s best moments of 2015 in this tribute video below: