IT SNOT ON: Player makes awkward apology after getting heavy ban for clearing his nose on opposition 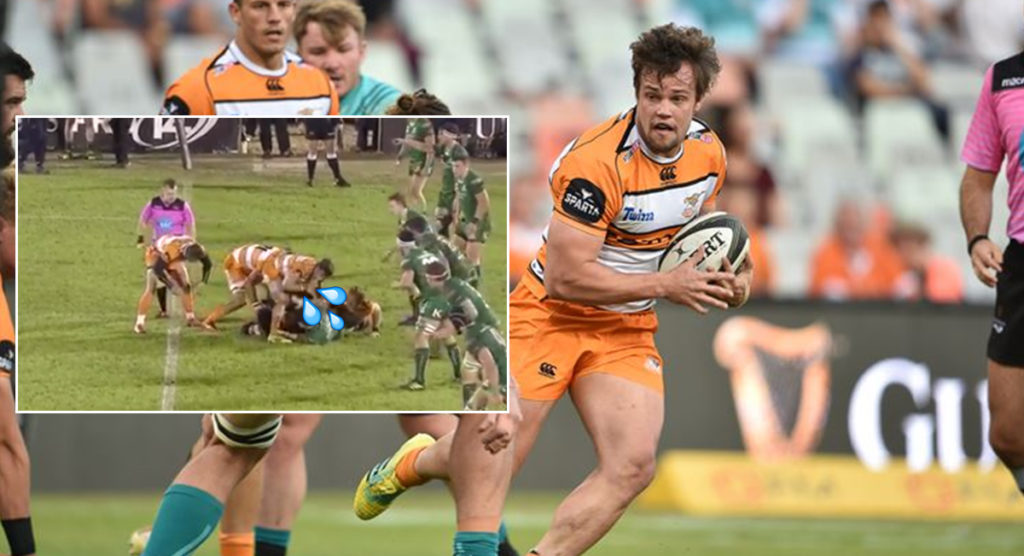 Cheetahs centre Nico Lee has received a massive 13-week ban after his ‘unsportsmanlike behaviour’ in Saturday’s PRO 14 match. Lee could be seen clearing the contents of his nose on a prone Connacht player at the bottom of a ruck.

The Free State Cheetahs have made an official statement, condemning the actions of Lee but supporting their player going forward.

“The unsportsmanlike behaviour is seen in a very serious light by rugby hierarchy. The Toyota Cheetahs condemn this behaviour which it is not part of the team culture and accept the punishment as such.

“Nico is a star player and according to information from the team, he deeply regrets his behaviour and apologised immediately after the match to the opponent. The Toyota Cheetahs realise that he is remorseful of his actions and the team accepts the apology.”

After being cited for allegedly infringing Law 9.27 – A player must not do anything that is against the spirit of good sportsmanship, a disciplinary hearing in Cardiff heard that Lee accepted that he did in fact commit the alleged act of foul play.

Cheetahs player Nico Lee banned for 13 weeks after he "accepted that he had cleared the contents of his nose onto the face of an opposing player." pic.twitter.com/bpXRqT0L6l

The panel found that: “The player’s actions are an act of foul play. They have no place in the game. This is not a case of over-exuberance, or an act which is within the rules of the game going awry. It follows that by its nature this act is one that is deserving of punishment. It is contrary to the spirit of sport.”

It was accepted that: “The effect on the victim player was understandably serious. There is no expectation, and there ought never be an expectation, that an opposing player would clear the contents of their nose onto an opponent.”

In upholding the citing complaint the disciplinary committee deemed that the offence merited a red card with a top-end offence with an entry point of 26 weeks.

In reaching that conclusion the panel found that: “It is difficult to imagine how an act of foul play of this sort could be worse, save for repeated acts or where actual injury is caused.”

The panel did not find any aggravating factors and applied mitigation of 50 per cent in respect of the player’s admission of facts, and his clean disciplinary record. The panel found that the player’s approach to the hearing and his conduct throughout was mature, sensible and considered. They found that there was demonstrable “regret and an element of embarrassment about the situation”.

The committee took into account the rugby calendar for the rest of the season and for domestic fixtures in South Africa, and as a result, Lee is banned for a period of 13 games and is free to play from midnight on Sunday, July 21, 2019.

Lee and the Cheetahs put out an official apology, with Lee stating that it’s not the type of person he is.

“It was an act of stupidity.. I’d just like to say sorry, and apologise for everything,” he said.

IT SNOT ON: Player makes awkward apology after getting heavy ban for clearing his nose on opposition | RugbyDump - Rugby News & Videos