James Downey's huge hit on Mike Brown at The Stoop 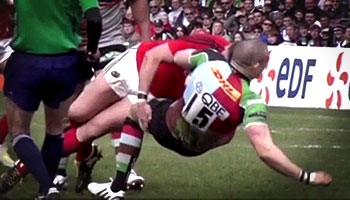 The Munster midfield duo of James Downey and Casey Laulala may not be the youngest around, but against Harlequins at the weekend they imposed themselves physically, playing a major role in the 18-12 Heineken Cup Quarter Final victory at The Stoop.

Downey, who played five seasons at Northampton Saints, returned to England with one of the tackles of the weekend, halting fullback Mike Brown’s progress in no uncertain terms.

It was perhaps indicative of the attitude and commitment Munster had on the day, coming back from a PRO12 loss to Glasgow, looking to make ammends and throw everything into this fixture.

“We just imposed ourselves on them physically. We said we wanted to do that. Obviously, English teams are normally physical and we had to step up and increase the intensity,” said Downey.

“It went well and I got my hands on the ball early, I wanted to do that. I made some tackles as well. That’s a big part of my game and I’m glad it paid off. It is the kind of game I like, it suited my sort of style. There is a time and a place for it, it is a fine balance,” said the big centre.

Speaking yesterday at a recovery session at the University of Limerick, Downey said that it was a unique day to be a part of. “At the end of the game when you are walking around and seeing so many Munster fans, wondering where they got all the tickets!

“I don’t know where they got them from to be honest. But that’s it, that’s what makes these days.

“As Paulie said, when you go out there you find someone in the crowd and look at them and you see what it means to them. They had paid good money to get over there and get the tickets; you have to produce for them, that’s what it’s all about.”

It was a fantastic European win for Munster, but the two-times champions now need to switch focus back to the RaboDirect Pro12, and their crunch Thomond Park clash with Leinster this Saturday.

“I think we have just got to keep it going. We need a couple of back-to-backs wins and no better game to have than Leinster to be honest. That Harlequins game was a full performance, but it is about backing it up now and we have to back it up this week.

“We still have a chance of making the Pro12 play-offs. It’s a long shot, but the chance is there and we haven’t beaten them in a while. It’s time we put that right, especially at home,” he said.

Exeter Chiefs are reported to be close to signing Leinster secondrow Jack Dunne, in the process beating a rival Irish province to the punch for the hulking forward.