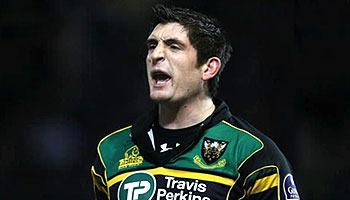 Northampton Saints put in a convincing display against Bath on Friday night as they won 31-10 at Franklins Gardens, giving them their third win in three matches to take them clear at the top of the Aviva Premiership.

Last week they beat Harlequins, with James Downey showing his presence on defence, and against Saints we saw much of the same as early on the big centre made this impressive hit on opposite number, England international Shontayne Hape.

Phil Dowson scored, with lethal winger Chris Ashton scoring twice, and Joe Ansbro also crossing for a try in the second half as they got their bonus point win.

Bath coach Steve Meehan was understandably upset at the big loss. “That was nowhere near the standards we set ourselves and, as a result, it was a wake-up call very early in the season for us,” he said.

“We had a good warm-up and everyone felt good. So to go out and lose the physical battle – particularly at the breakdown – was disappointing. We have the next two weeks now where we have to turn it around. We talk about player empowerment and responsibility and this is when they need to take it,” Meehan added.

This was one of the better hits on the night, with league convert Hape stopped dead in his tracks.