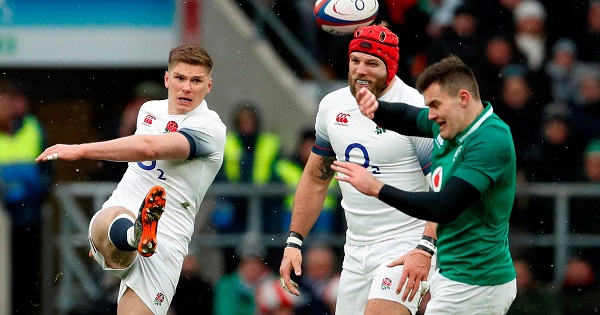 Eddie Jones’ England slumped to a third straight defeat against Ireland after a somewhat calamitous performance at Twickenham last weekend. They finished fifth on the overall table when most thought the St Patrick’s Day clash would be the decider.

The Irish ran in three tries in the first half to all but seal the victory while England summed up their waywardness with James Haskell copping an unfortunate falcon from team-mate Owen Farrell.

It was perhaps a spot of comic relief after an opening 40 minutes utterly dominated by Joe Schmidt’s Ireland. But more impressive was Haskell’s nonchalant reaction to being clobbered by the ball at such close range.

We’ve seen our fair share of falcons – a player being hit on the head or in the face by a ball – ranging from Jamie McIntosh to Kurtley Beale and Cory Jane. They became so regular that a few years back, Rugby HQ even made a Top 5 Falcons of All-time segment.

Already behind on the scoreboard, perhaps Haskell wasn’t in the mood for laughing when he took Farrell’s friendly fire. Hopefully the back-rower can knock these falcons on the head in the future.

Haskell takes one for the team with first half falcon