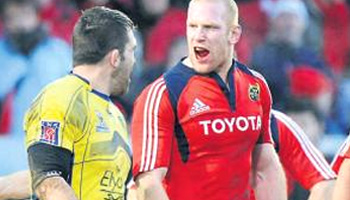 Last weekend Clermont and Munster locks Jamie Cudmore and Paul OConnell were involved in an altercation that resulted them seeing red and yellow respectively.

Canadian Cudmore has since been hit with a five-week ban for punching after he was given his marching orders for striking OConnell in the 18th minute of the 23-18 loss to Munster.

Cudmore appeared before an independent disciplinary committee in London on Thursday and the panel agreed the offence was of the mid-range in the level of seriousness for striking.

Having taken into account any mitigating and aggravating factors the committee suspended Cudmore for five weeks, from the date of the match up to and including Sunday January 18, 2009.

The ban means Cudmore will miss the Heineken Cup clash against fellow French side Montauban in the New Year. He has the right to appeal the ban.