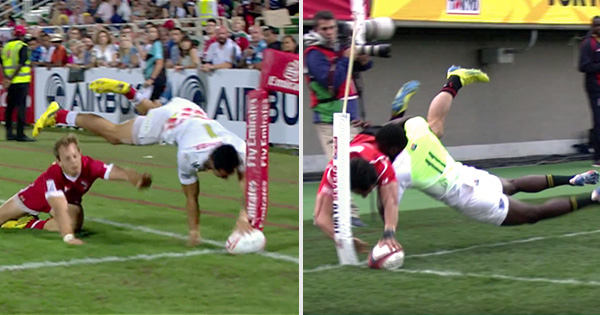 We’ve seen Jamie Henry do this before…..what a finish!

Japan’s Jamie Henry scored this unbelievable try against Canada at the Dubai 7’s, being named as one of the top tries of the tournament. Incredibly, it wasn’t the first time he has done something like this. He actually scored a near identical try last year in Tokyo.

On that occasion it was against South Africa and in the opposite corner, but it was equally impressive. While scoring like this is more commonly seen in rugby league than union, this is clearly something Henry has mastered, and sides no doubt practice it these days.

There was some concern over the legality of the try in Dubai, but World Rugby Law 22.12 states:

Based on that, which says nothing about touching the tryline and corner flag simultaneously, the try was okay to be awarded. It was a very near thing though, so opinions may vary.

You can see the latest try above, and below is his brilliant effort from March last year, that was named the Fans Favourite Try at the Tokyo Sevens