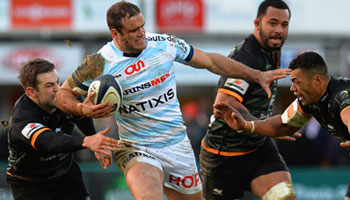 Jamie Roberts was named Man of the Match in Racing Metro’s 32-8 victory over Northampton Saints at the weekend. Roberts carried well and showed superb handling skills, particularly on this occasion when he got down low to pick up a low pass.

Racing Metro’s deep pockets have meant that they can call on players of the calibre of Roberts to play their part in Europe, as they strive to challenge the likes of Toulon at the top.

“We have a big squad with a lot of depth and we want to make an impact in the league and in Europe. We have a home draw and no one will be looking forward to coming to Paris,” said Roberts.

He hasn’t had a whole lot of game time but certainly took his chance on this occasion.

“It was only the third game I have played since the November internationals. The squad is so big that you sometimes find you do not play for a couple of weeks. It is frustrating but when you have the opportunity in a big match you have to deliver and I am glad I did.”

Wales fans will be pleased to see the form he’s in, just ahead of their crunch Six Nations opener with England. Roberts was up against Luther Burrell, who he might see next in England colours.

“Luther plays in a similar mould to me. He is very physical and very direct and he is a dangerous player. England have an embarrassment of riches in the midfield with Luther, Brad Barritt, Billy Twelvetrees, Kyle Eastmond and Jonathan Joseph. It will be a huge match-up whoever they pick.

“The game against England promises to be an epic battle: it is World Cup year and they are in our pool. It was a special day when we played them two years ago and the ingredients are there next month to better that. It is a game that as a player you want to be part of and it will be good to go into camp on Monday.”

Below is a look at his outstanding pick up, and on page two you can view a quick highlights reel featuring all his best moments from the match.

Jamie Roberts highlights from his great performance against Saints