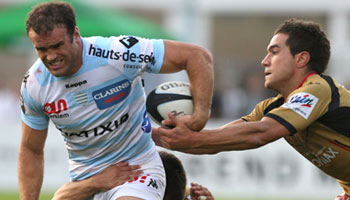 British & Irish Lions stars Jonny Sexton, Dan Lydiate and Jamie Roberts are all at Racing Metro in France this season. So far Sexton has played pretty well, as can be seen with the confident break in this clip, but on this occasion Roberts failed to finish off what could have been a great try.

After fracturing the defence, all Racing needed to do was get it wide and a try was sure to be on, but Roberts’ poor pass killed the move. As you can see, he was pretty disgusted with himself.

It mattered little though as they bounced back from last weekend’s loss to Toulon by beating Oyonnax 22-9. Sexton scored 17 points and Virgile Lacombe scored a late try to seal victory.

Match report from Racing Metro vs Oyonnax mentioning another new signing, Springbok Juandre Kruger, who flew in for the game. Shortly afterwards he had to head off to join his team in Australia, where the Springboks take on the Wallabies in the Rugby Championship this weekend.