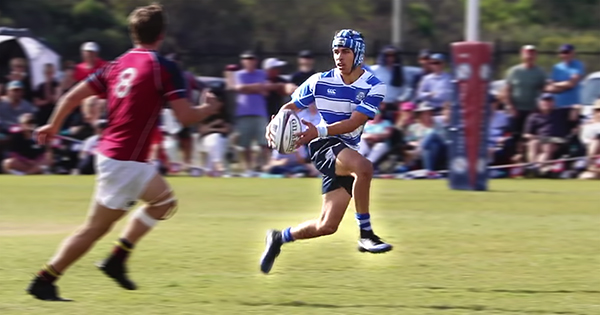 While there has been a lot of talk about the state of Australian rugby of late, their school system still manages to produce a number of really talented individuals, feeding both League and Union. One such prospect is 17-year-old Jangala Bennet.

As noted by Rugbypass, Bennet is the latest schoolboy sensation turning heads at Queensland’s Nudgee College, the breeding ground for the likes of James O’Connor, Sean McMahon and Will Chambers.

Bennet started in rugby league and played until he was 16, but switched to union when he found that his speed and stepping started to get him noticed.

He was selected to play for Queensland Schoolboys on the wing, showing glimpses of his devastating footwork, most notably in a video we shared on our instagram earlier this year (see below).

With one year left at Nudgee, Bennet is aiming to achieve selection for the Queensland Schoolboys again and push his case for the Australian Schoolboys team.

Over the years we’ve seen the likes of Kurtley Beale and Quade Cooper tearing it up in school then going on to achieve their potential at a higher level. From what is evident here, with some hard work and further dedication, Bennet may yet have that path ahead of him.

Bennet beats a man one of one for Queensland Schoolboys