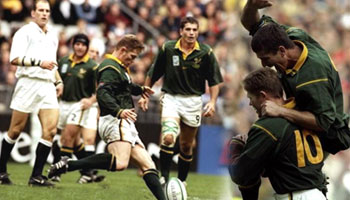 On the eve of possibly the biggest game of the 2007 WC tournament so far, we look back to the 1999 World Cup Quarter Final between the Springboks and England in Paris.

It was a tense, untidy match dominated by the boot in the. England and South Africa battled it out for forty minutes, staying relatively even on the scoreboard.

In the second half however, Springbok flyhalf Jannie De Beer stamped his name into the annals of Rugby World Cup history with not just one dropgoal, but 5 of them, taking the Boks to victory and the Semi-Finals as they won 44-21.

I’ll never forget watching the game live in a small pub in Edinburgh, surrounded by Englishmen, but cheering everytime I saw the image of referee Jim Fleming running towards the poles with his arm up.

So with the two sides meeting again tomorrow night in a titanic clash that will secure the winners a place in the next round, the question is ‘Who is going to step up to the plate?’.

At flyhalf it’s a battle of the big hitters – Butch James vs Andy Farrell. I don’t see either of them knocking up the dropgoals, so perhaps someone like Francois Steyn will be seen sneaking into the pocket to have a crack. Or, and don’t quote me on this, Jonny Wilkinson may make a miraculous recovery and surprise everyone by walking on wearing number ten.