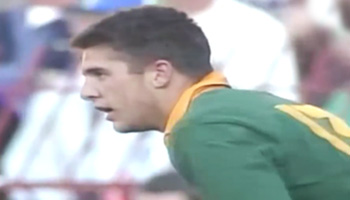 Today it is exactly 20 years since South Africa won the 1995 Rugby World Cup by famously beating New Zealand 15-12 in a tense Ellis Park final. The win saw the newly democratic country overcome a number of odds, including stopping the imposing figure of a young giant named Jonah Lomu.

The surviving members from that historic day in 1995 got together in Johannesburg today to relive the wonderful occasion, and share in what was a very special time for South Africa. While the late coach Kitch Christie and star flanker Ruben Kruger were notable absentees, their memory lives on in what the Springboks accomplished at a significant time for the country.

The result unleashed a tide of goodwill and nation-building across South Africa, which a year earlier had celebrated democracy after decades of racial segregation.

“Mr Mandela together with that Springbok team pointed the way to a new future for our people and 20 years later that day still has a massive resonance. We continue to salute the 1995’ers for what they achieved as a rugby team and what they meant to a nation,” said SARU president Oregan Hoskins.

As described by Springbok right wing on the day, James Small, centre Jampie Mulder’s tackle on Lomu was a hugely signicant moment in the match. It’s a tackle that will forever be remembered by South African fans, at a time when Lomu was all but unstoppable.