Jaque Fourie and Quade Cooper both suspended for dangerous tackles 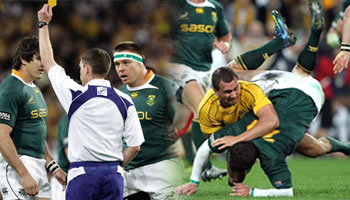 Jaque Fourie and Quade Cooper have both been suspended following dangerous tackles they made during the Wallabies successful start to the Tri Nations campaign in Brisbane yesterday.

It was a repeat of the previous two matches for the Springboks as they once again had a player sent from the field within the first few minutes of a Test match. This time it was center Fourie for his lifting tackle on Richard Brown.

Upon recommendation from the touch judge, referee George Clancy yellow carded him. In staying consistent, Clancy carded Wallaby flyhalf Cooper for a similar offence in the second half.

While both spent their ten minutes in the bin, that apparently wasnt enough as they were both cited, and have subsequently been suspended. Cooper received two weeks for his tackle, while Fourie was given four for his.

Both tackles weren’t malicious and yellow cards seemed sufficient. Last week Jean De Villiers was handed a two week suspension for a tackle that was similar in nature to both of these. He wasnt yellow carded during the match though.

The disparity in the sentencing is most likely to be because of the upcoming fixtures. So to look at it differently, Cooper got a two match ban, while Fourie got a three match ban.

Both players were found guilty of breaching Law 10.4 (j), but the tackles were considered at the lower end of severity. An entry point for a low grade lifting tackle is three matches.

Coopers clean record played in his favour, while Fourie was suspended last year for a similar offence on Maa Nonu, for which he was suspended.

What do you think of the rulings?