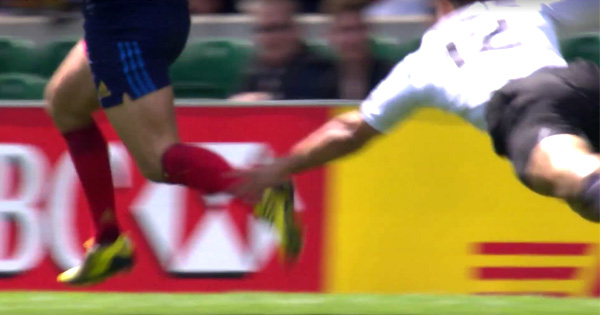 Jarryd Hayne came on late in Fiji’s Cup Quarter Final against France and was shown up on defence straight away, as he overshot and had to turn to chase a break down the right wing. He managed to save face though, putting in an excellent ankle tap that proved to be a try-saver.

For some reason World Rugby edited out the lead up to the French break, not giving fans a full view of what really happened, only shining light on the good work Hayne did. We’ll try to get a clip fo the full lead up for you, as this is pretty misleading. The ankle tap was great though.

Hayne hasn’t had a huge amount of success thus far in London, having a few decent touches but also giving away some penalties, showing that he still has a lot of learning to do.

He hasn’t made a fool of himself by any means, but as most people predicted, he hasn’t really had time to really show what he is capable of. With Fiji through to the Cup Semi Finals, hopefully he’ll get more chances to show his worth later today.