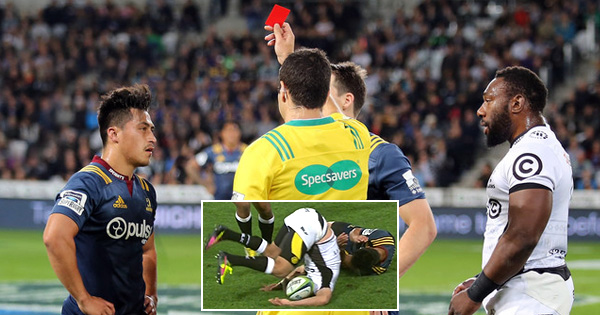 Highlanders back Jason Emery has been suspended for four weeks for his dangerous challenge on Willie le Roux during the Super Rugby champions’ meeting with the Sharks on Friday. Emery was given a six week ban, but it was reduced due to mitagating factors such as his admission of guilt and exemplary disciplinary record.

A SANZAAR Judicial Hearing found Emery guilty of contravening Law 10.4(i) Tackling, tapping, pushing or pulling an Opponent jumping for the ball in a lineout or in open play.

Emery was given a red card by referee Ben O’Keefe, but a hearing followed and he will now be out of action up to and including Saturday 21 May 2016 (three Super Rugby matches).

In their finding, the Judicial committee ruled the following:

“Jason Emery (the Player) appeared before a SANZAAR Judicial Committee having been red carded in the match between the Sharks and the Highlanders for a breach of Law 10.4 (e).

“During the hearing the charge was amended as a breach of Law.10.4 (i) and Mr. Lloyd, acting for the player, raised no objection. The player pleaded guilty to the amended charge.

“After careful consideration of the available evidence and the very helpful submissions of Mr Lloyd the offence was categorised as mid-range which carries a six (6) weeks suspension.

“The Committee took into account as mitigating factors the player’s exemplary clean disciplinary record after seventy first class matches, his apology in person to Willie le Roux immediately after the match and on social media, his guilty plea and the fact that the tackle was rather reckless than deliberate.

“The Player was therefore given a two week discount on the recommended sanction of six weeks.

“The Player is accordingly suspended from all rugby until 21 May 2016 which effectively is a three match Super Rugby suspension. We were provided with proof that he would have been selected to play in a club match on 21 May 2016 which match the player will also miss as a result of the suspension.”