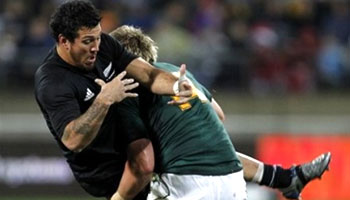 While a lot of the debate after the match was about the Rossouw incident, the Ranger tackle on Kirchner, and Richie McCaw being uncardable, this citing perhaps surprised some as it seemed fairly innocuous at the time.

In recent years however, weve seen that this type of tip tackle is being stamped out of the game, with players have been shown yellow, and even red carded, for similar offences.

De Villiers appeared before judicial officer Dennis Wheelahan who found the South African back, who was playing out of position at wing, to be guilty after considering submissions from himself, his representatives, and taking into account video evidence.

He is now suspended until 1 August and will miss the upcoming Test against the Wallabies in Brisbane. With the form hes been in on the wing, and after having left the field with an injury in the second half, it seems as though he might not have played anyway.

One gets the impression that if it were spotted, and dealt with, by the officials during the match, the citing wouldn’t have been necessary. In this case, two weeks probably equals a yellow card.

Do you think the suspension is harsh, or is it simply along the lines of recent judgements on dangerous tip tackles, therefore making it consistent and fair?