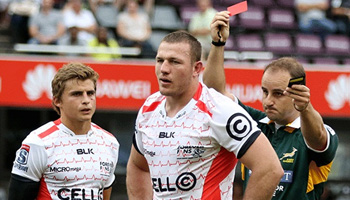 Sharks flanker Jean Deysel has been banned for 7 weeks following the red card he received in the 52-10 defeat to the Crusaders on Saturday. In an interesting twist, his off-field family trauma has been taken into account as mitagating factors for the knee to the head.

The Crusaders scored an unprecidented eight tries in Durban, but have the Sharks a bit of a chance late in the first half when they had no less than three players yellow carded within minutes of one another.

As the Sharks attacked, that advantage was nullified by Deysel’s dangerous play after he was clearly frustrated with the visitors slowing down the Sharks’ quick ball. He was sent off by referee Stuart Berry, giving the oppostion a man advantage for most of the second half.

In the subsequent SANZAR disciplinary hearing Deysel gave a guilty plea for contravening Law 10.4 (a) Punching or striking. Duty Judicial Officer Nicholas Davidson QC accepted the plea, and suspended Deysel from all forms of the game for seven weeks.

In his finding, Davidson ruled the following:

“Video footage provided clear evidence that Jean Deysel was engaged at the breakdown when he jumped up then brought his right knee down on the side of Matt Todd’s head while he lay on the ground.

“While Todd was fortunately not injured, the act carried real potential for injury and Todd was in a vulnerable position. The breach of Law 10.4 (a) required a mid-range entry point which carries an eight-week suspension.

“I added an additional week for Deysel’s recent offending as an aggravating factor.

“He was suspended for three weeks for foul play last Super Rugby season. I then addressed mitigating personal circumstances and the discount available for an admitted breach, not that there was any defence for his actions.

“Deysel, to his credit, did not seek to minimise his actions. He said he was deeply ashamed and that his actions were against everything he stands for, despite his earlier breaches.

“He could only refer to his emotional and irrational response when frustrated at the breakdown, and he asked himself why he acted in such an extreme manner.

“After my preliminary considerations, I was advised of an off-field mitigating circumstance which may in rare circumstances be brought to account under Regulation 17.

“In this case, there are truly exceptional circumstances associated with the health of his immediate family which must bear on his state of mind, and go some way to explain his irrational actions. This is not an excuse but a basis to exercise some small leniency in the sanction applied.

“A discount was applied due to these mitigating factors. I took into account that the Sharks have a bye in Round 11, in effect making this a six-match sanction. Therefore, the player is suspended from all forms of rugby up to and including Saturday 23 May 2015.”

(f) any other off-field mitigating factor(s) that the Disciplinary Committee or Judicial Officer considers relevant and appropriate.

View full highlights from the match below, including all the tries, the 3 Crusaders yellow cards, and the Deysel red card (6:25), which can also be seen briefly above.