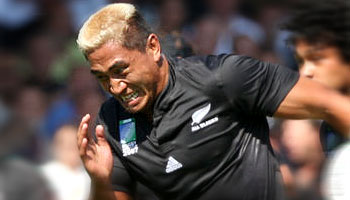 Former All Blacks hardman Jerry Collins has been held by Japanese police since March 17th following his arrest for carrying knives into a department store in Hamamatsu, Japan. It has since emerged that he felt he was under threat from a Brazilian gang.

In a bizarre and unfortunate turn of events, Collins walked into an upmarket department store, laid two 17cm knives down on the counter, and waited for police to arrest him. Over twenty arrived after the first police officer reportedly saw how big Collins was, and called for backup.

“They just walked him out of the shop normally, but there were 30 police surrounding him so it created a big scene,” said the store manager, who added that Collins went peacefully.

The 32 year-old All Black star, who has been playing rugby for Yamaha Jubilo club, has been detained at the local police station. A few days back he was visited by New Zealand TV show Campbell Live, who were able to get inside and have a brief chat with him.

He told the show that he feared for his life after he was being chased by a gang that reportedly disliked foreign rugby players being in their city, dating back to before Collins even arrived. He also said that he was extremely relieved to have been arrested.

While there has been speculation that his behaviour resembled that of someone dabbling in drug usage, he denied that claim and said that he has been tested and came out clean.

His lawyer aims to dispute all potential charges and arrived in Japan with letters and character references from the New Zealand Rugby Union, family, friends, churches, and community leaders.

“Just to identify for the authorities that this man, who is of course so well known as an All Black, also has so many other qualities, has provided so much to the community, to young people,” lawyer Tim Castle, who aims to have Collins freed from custody this week, said “It’s important that the authorities who may not know these things receive that kind of information.”

In Japan police can hold suspects for up to 23 days without charge. Collins’ contract with his club is due to expire on March 31, and they have said that they know nothing of his fears or mental state.

“The authorities in Japan have accepted that this was a minor indiscretion, and that there were extenuating circumstances for the possession, and that there was neither sinister nor threatening purpose,” said his lawyer, Tim Castle, who flew to Japan to oversee his release.